The grid-tied, on-grid or grid-interactive solar rooftop system is the most common type of PV system.

In this battery-less system, the solar generation is first used to meet the demand of the existing loads and any excess generation is exported to the grid. If there is a short-supply or no solar generation, then the required energy is imported from the grid. Export & import are calculated with help of bidirectional meter

A bi-directional net meter records the exported and imported electricity and the consumer is charged only for the net electricity consumed from the grid at the end of the billing cycle.

WHICH INVERTER SHOULD I USE?
If you are considering a solar system for your home, one of the key decisions you have to make is the type of inverter to install. Inverters convert direct current (DC) electricity generated by your solar panels into usable alternating current (AC) energy. There are three types of inverters available in the market: string (also known as centralized) inverters, micro-inverters, and power optimizers.

String inverters are the most commonly deployed option globally because of their relative lower cost. They are suitable for a roof space that is not shaded at any point during the day and does not face multiple directions (such as a gabled roof). In this system, a string of solar panels will only produce as much electricity as its least productive panel – if one or more of your solar panels is shaded during any part of the day, the power output from that entire string would be reduced to its level.

Micro-inverters are rapidly gaining popularity, particularly for residential solar systems. They are installed on each individual solar panel and convert DC electricity into AC electricity at the panel level itself with no need for a separate central inverter. This way, shading on one or more panels does not affect the output of the other panels and panels can be placed in different orientations. Also, the performance of each solar panel can be individually monitored.

It is known that shading of as little as 10% of a solar system connected to a central inverter, can lead to a system-wide decline in power output of over 50%. So, although, a solar system with micro-inverters tends to be more expensive than one with string inverters, it results in greater savings on account of system efficiency.

Power optimizers, which are usually integrated into the panels themselves, also reduce the impact of panel shading on system performance and offer panel-level performance monitoring like micro-inverters. However, instead of converting the DC electricity to AC electricity at the panel level, they dynamically “condition” the DC electricity for maximizing the output and send it to a string inverter. This approach results in higher system efficiency than a string inverter alone and lower costs than micro-inverters.

The following video explains and compares the features of the three types of inverters:

HOW MUCH WILL I SAVE?
With rising grid electricity tariffs and falling cost of solar PV systems, rooftop solar is becoming a more attractive investment by the day. Besides, there are various solar policies that incentivise rooftop solar in India, such as:

By adopting solar energy, you can see an immediate reduction in your energy bill, get a pay-back in as early as 4 years and enjoy free electricity for over 20 years! Ever heard of a safer investment that gives a rate of return (IRR) of 15%-20%?

Take the leap and get your unutilized roof space to power a brighter future for yourself and the planet!

An off-grid solar system is best suited for remote areas with poor or no access to the grid. As the name suggests, this solution is completely independent of the grid and can be configured to power a wide range of appliances from lights and fans to fridges, washing machines, computers and even air-conditioners! 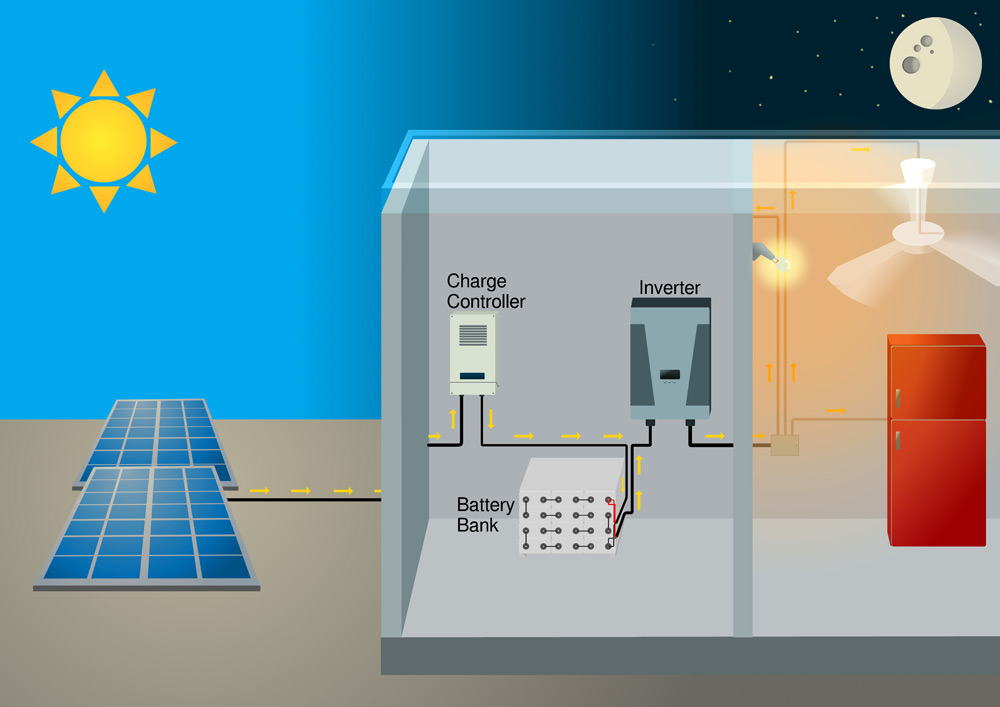 A hybrid solar system combines the best from the grid-tied solar system and the off-grid system: it can interact with the utility grid and also store energy in a battery bank.

This feature makes the hybrid system a more economical and environment-friendly alternative to an on-grid solar system with a backup diesel generator. 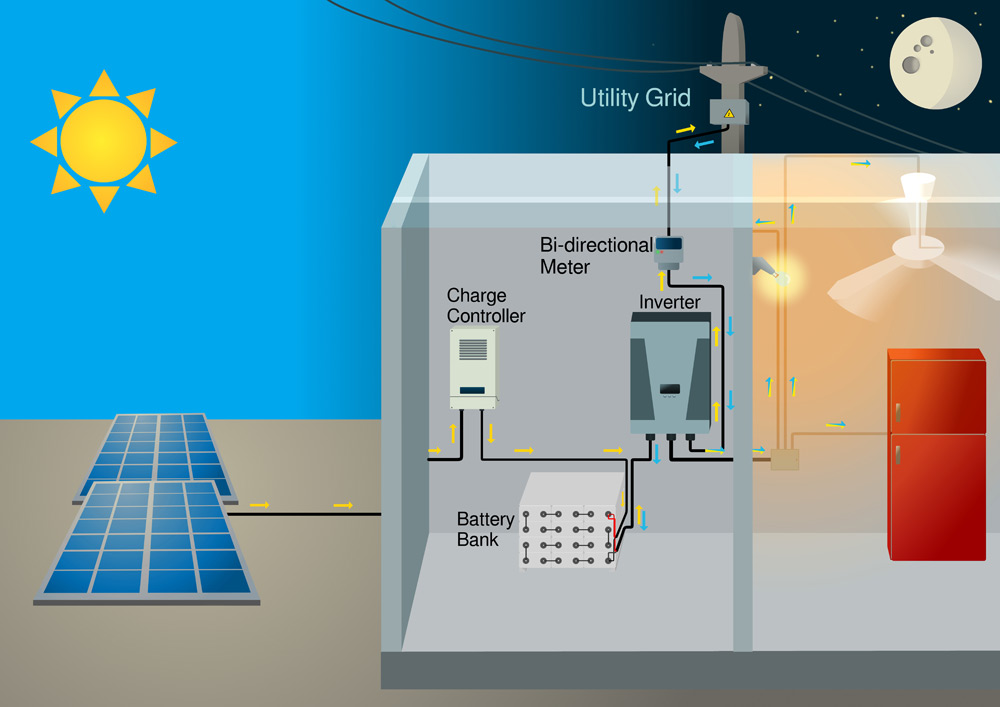 Moreover, any shortfall in solar generation is compensated by importing electricity from the utility grid, e.g. for charging the batteries or powering the load.

The net energy is measured by a bi-directional meter based on the energy imported and exported between the system and the grid.

In remote areas with infrequent or no power supply, the lack of a reliable water supply is a major concern. Solar powered water pumps are ideal in such situations to draw water from bore wells or water reservoirs for diverse applications such as irrigation, supply of drinking water or meeting household needs. These versatile pumps can run directly on solar panels, or on single phase grid supply or even on batteries if there is no grid supply.

The pumps are available in various capacities with head heights ranging from 15m to 120m. The solar modules can be mounted on a customized mounting structure and the pumps can run even in low sunlight conditions with a voltage range from 30V to 300V DC. They are equipped with a sensor that protects them from a dry run and they can be remotely monitored via a data logger. 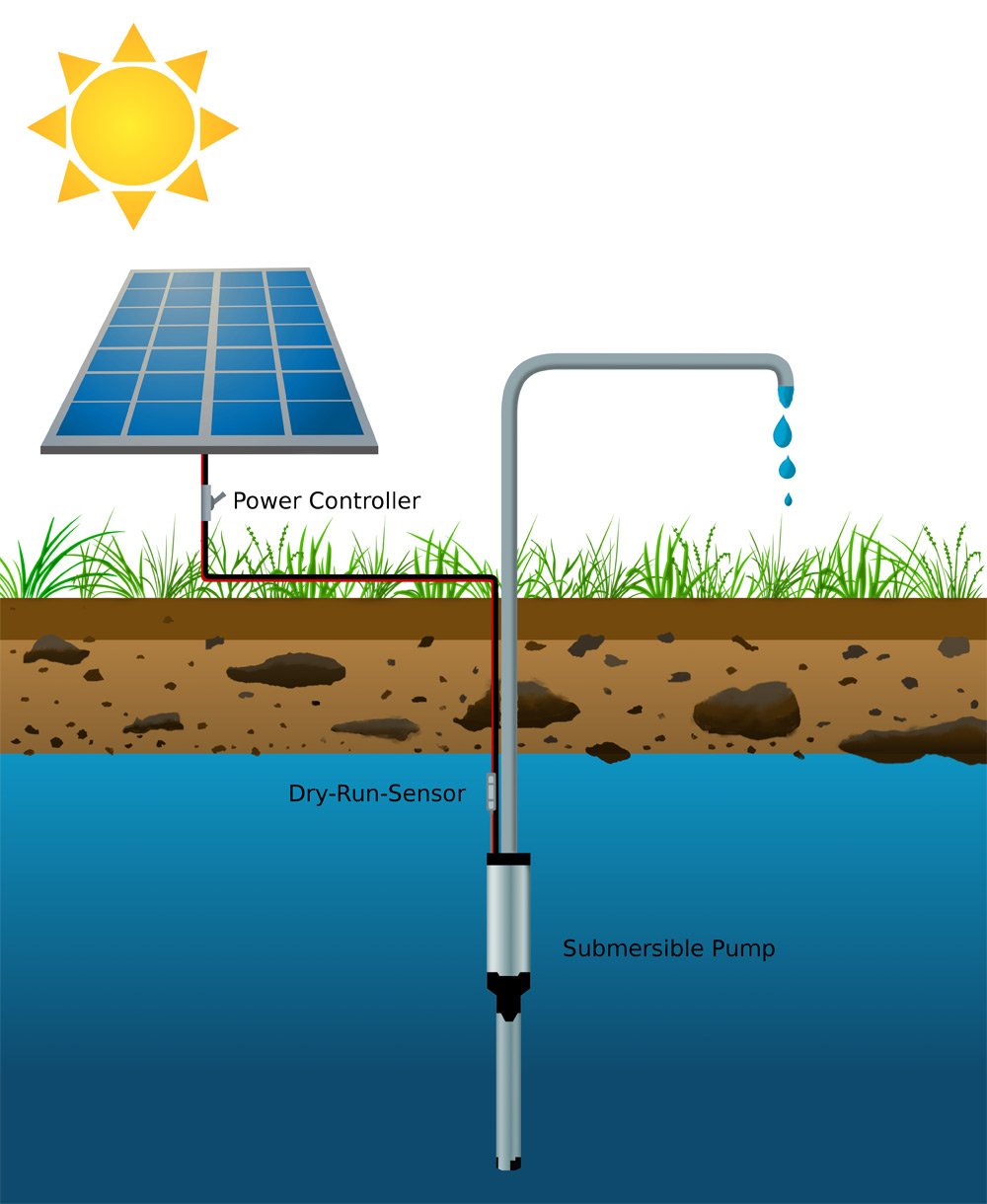