Located at the pristine foothills of the scenic Western Ghats, Kalasalingam Academy of Research and Education (KARE) was established in 1984. The University caters to students from all walks of life through its undergraduate, postgraduate and doctoral programmes.

They have elaborate infrastructure spread over 320 acres. It is the first university in India to introduce a special B. Tech programme in engineering for the differently-abled (speech and hearing impaired) students.

The University Board of this progressive and conscientious university had been troubled by their high electricity bills . Thus, it unanimously decided to opt for solar energy to power their campus.

It also helps them in promoting green initiatives across the campus in various departments and inspire future generations graduating from the campus. They had approached Sunlit Future to install rooftop solar grid-tied systems on the campus in phases.

So far there was 503kW solar was installed on the various buildings of the institute in three phases.

In the 1st phase of going solar, a 96.48kW rooftop solar grid-tied system was commissioned on 18 May 2017. The University decided to go for the SolarEdge power optimizers and inverters rather than traditional string inverters to have a higher solar yield and greater savings.

These products aim to increase energy output through module-level Maximum Power Point Tracking (MPPT) and also provide module-level remote monitoring via the SolarEdge monitoring web portal and mobile app as shown in the gallery below.

Highly satisfied with the quality of the installation, the solar generation and the service, Kalasalingam University approached Sunlit Future for the II nd phase of its drive for rooftop solar and commissioned another 144kW in IInd phase.

With 503.68 kWp solar rooftop system on various buildings in Kalasalaingam university, it contributes to savings of about Rs.4,10,000/month. This system generated about 63,162 kWh/month on an average every month.

All the three phases of the project were installed on the flat roof with the help of pre fabricated cement ballast structure made of Aluminium. This structure helps in corrossion free and long durability of the system. 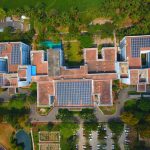 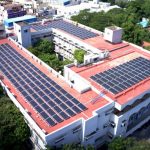