Adding to the mission, Aravind Eye Care hospital in Puducherry had gone for a 201 kWp solar PV system on its rooftop to cater to the continuous energy consumption of the hospital in a sustainable way.

With continuous inpatients and huge number of surgeries taking place round the clock, the hospital is contributing to huge electricity consumption. Due to which, they are incurring huge electricity bills and dependent on fossil fuels for that.

Inorder to decrease the electricity bills and contribute towards sustainable way of power generation, Aravind Eye Care hospital in Puducherry had gone for a 201 kWp solar PV system on its rooftop.

201.28kWp solar was installed on the roof of the Aravind Eye Hospital in Puducherry in two phases.

In the 1st phase of going solar, 136kW rooftop solar grid-tied system was commissioned on 24th January 2018. The University decided to go for the SolarEdge power optimizers and inverters rather than traditional string inverters to have a higher solar yield and greater savings.

Highly satisfied with the quality of the installation, the solar generation and the service, Aravind Eye Care had further considered II nd phase of its drive for rooftop solar and commissioned another 64.6kW in IInd phase.

With 201.28 kWp solar rooftop system on various buildings in Kalasalaingam university, it contributes to savings of about Rs.1,64,650/month on an annual average. This system generated about 25,363 kWh/month on an average every month. 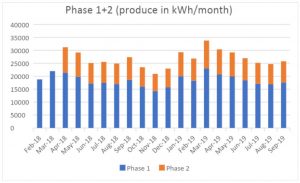 Generation of Phase I & II in kWh 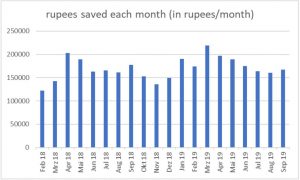 Both the phases of the project were installed on the flat roof with the help of Ganges structure. It is long lasting and durable enough to hold the modules for more than 25 years. 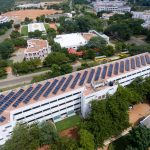